The following document covers a two day offsite meeting of the initial openSUSE build service team. It summarizes expectations, concerns, ideas and opportunities around the build service part of the openSUSE project. It is a rough collection of bits and pieces, neither complete nor final.

Please note that these meeting minutes do not reflect any official Novell statement or any binding roadmap or schedule. It is open for discussion and improvement and reflects solely the ideas and opinion of the individual participants. (sp) 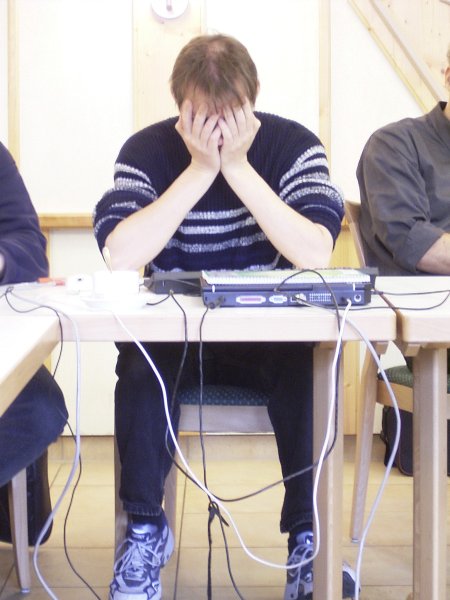 Brainstorming for an external Name:

So, it is not just 'build server', but 'build service'. That is more than a simple server.

(number of votes in parenthesis)

Larger user base and more developers(4).

openSUSE build service is not...

Requirements and use-cases (from reality and product management ;) , by adrian) 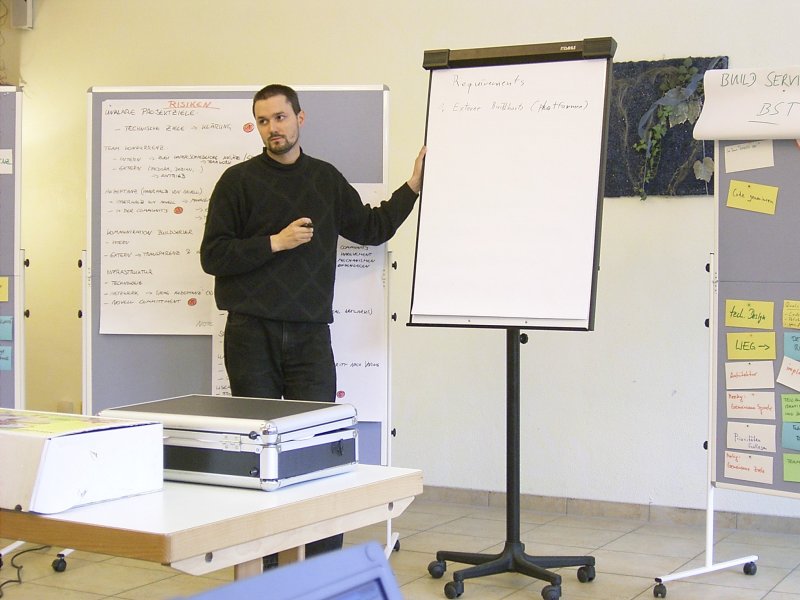 (as extracted from the use cases)

(as extracted from the use cases)

We need to check our results for inconsistencies, goofs, and omissions, before going public.

Can we define a more detailed time-line?

The software architecture allows for multiple Base-Operating Systems (SLES, openSUSE, Fedora, Debian are shown above). Each Base-OS may support one or more architectures (Hardware Platforms).

Users create a project-space for building their software. A project-space can be 'on top of' one or several Base-OSes. A Base-OS is a fall-back for packages that are not contained in the project-space. A typical project-space is e.g. kde5, containing a future release of the K Desktop Environment (shown as KDE-Project above). Such a project can build its contents against multiple Base Operating Systems, resulting in multiple sets of binary RPMs. 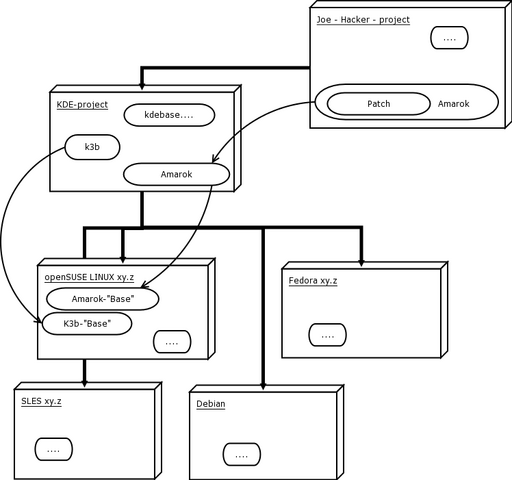 Once kde5 was successfully built, other packages can be tested on top of it. In the picture above, the kde-project took the standard sources of k3b (by referencing the sources found in a Base OS) and can now build k3b using the new kde5 libraries.

As an additional Illustration, let us assume, Mr. Joe Hacker created a feature-patch for amarok. He creates his own project-space for the patch. He does not want to check which Base-OS may be a suitable build environment for his patch, so he looks for a similar project. He chooses to apply his patch against the kde5 project (precisely: He'll build an amarok, using sources as found in the kde5 project (or in the base OSes) and his patch). This means that his build targets default to all the targets supported by kde5.

A build target is defined by a layered path of projects and Base OS and a hardware architecture. This layered path will be called platform.

Some packages need binaries of themselves before they can be built (Java, Gcc, Haskell). This calls for a build-server-admin. A new project may be based on a proprietary package (e.g. RealPlayer).

Projects may want to merge. We need mechanisms to detect related (or even identical) projects. What shall happen to depending projects, when a merge changes the platform structure. Maybe have a state 'frozen'? 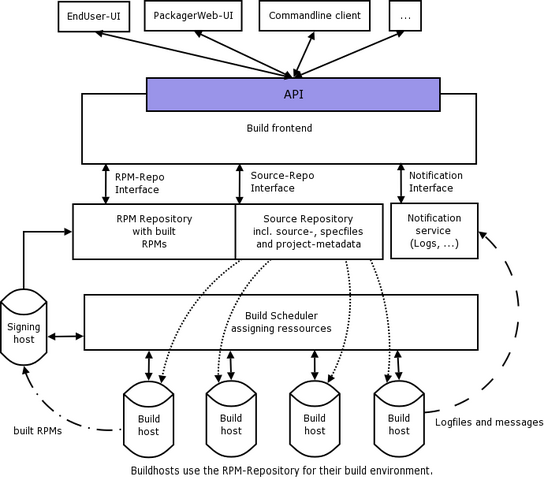 Structure of the tools and components

Web-based user interfaces and a command-line interface shall be available. Both the Web UI and CLI-client use the same Application Programm Interface. This API is provided by a build-frontend machine. It handles uploads and downloads and manages all meta-data. After uploading to the build frontend machine, a package is next checked in into the source repository. The build scheduler takes code from the source repository and dispatches build jobs to several build hosts. The build hosts return RPMs, which are stored in the RPM repository – to be downloaded via the build frontend API. The build hosts also return log files and events, which are passed to a notification service – also to be monitored via the build frontend API.

The significance of a signed RPM was discussed. We could not decide if a GPG-signature shall/can represent a trust level. A projects trust level depends on the entire chain of project admins, who accepted contributions or otherwise influenced the packages. The weakest link (least trusted person) defines the trust level of the entire project. Key signing works differently. Trust is already established if one of a group signs a key. We obviously need different semantics here.

A first draft for signed RPMs

A projects or packages' metadata is capsuled inside an xml-file, that travels through the system, along with the package or project. It contains

The openSUSE API provides the functions of the other three interfaces as transparently as possible.

Status, logs, Errors, events, etc are also stored recorded in the RPM repository. Shall not be mirrored, and are more dynamic. The Notification Interface supports simultaneous connection to multiple build frontends.

It delivers abstract events for:

The external notification interface is part of the openSUSE-API. Here are several addition notification services available that can be sent to a UI: ratings, users, transaction starts, source code changes...

Shall use a virtual XEN environment. This virtual server always starts from an empty image. It then loads the build system and all needed RPMs, as these packages are potentially insecure. Inside the XEN server the build script will run in a change-root-jail, so that logfiles can be guaranteed to exist after XEN exit.

The interfaces below the build frontend are a natural way to divide the work in two teams. The teamleads freitag & ro dispatch and define tasks among their team.

The early prototype shall support only one use-case, as defined by the following workflow:

First milestone is presented on FOSDEM, at end of February 2006.

defined by use cases:

He creates an own project for testing and maintaining his patches.
He then makes a request to have the patches accepted upstream.

Difficult to plan, but later use cases could contain these features:

We see the following alternatives:

We reached consensus that full open source is to be preferred.