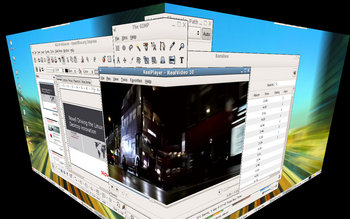 Cube - Switching desktops by rotating a 3D cube, with a running high-resolution movie bent around corner

Xgl is a new Xserver architecture layered on top of OpenGL. Xgl can perform intricate graphical operations--such as rendering antialiased fonts--noticeably faster than other available Xservers that do not use OpenGL. The current implementation is Xglx but the future implementation of Xgl will be Xegl.

More important than speed alone, Xgl accelerates complex composite operations, making possible new stunning visual effects through on OpenGL-enhanced composition/window managers like Compiz. These visual effects have broad practical use, making Linux more accessible for the visually impaired, and creating a workspace that is easier to comprehend and navigate for less experienced users.

Xgl must be used in combination with a compositor/window manager to expose all of its capabilities. Compiz is the compositor utility that was developed in conjunction with Xgl.

It is possible that future graphics hardware will support only 3D operations, without any 2D core any more. For this reason, Xgl is an important advance for all operating systems that rely on the X.org graphical foundation.

In early 2006, Xgl maintainer David Reveman submitted his latest enhancements to Xgl and Compiz for inclusion in the freedesktop.org CVS repository. Today, freedesktop.org hosts the source code for the Xgl packages.

Xgl and compiz are both created mainly by David Reveman (Novell) with some additions from Matthias Hopf (SUSE). Dave Arlie, Adam Jackson (Red Hat) and Jon Smirl worked on the stand-alone Xegl, which is not described here, but related to Xgl. Xgl uses the glitz API as an abstraction layer, which has been designed and implemented by David Reveman and Peter Nilsson (UMU).

Xgl is the frontend to several different flavors, with the glx backend (also called Xglx) being the major development driving force at the moment. This backend runs in a window on top of a regular Xserver (comparable to Xnest), which provides for the necessary OpenGL support. There is a -fullscreen switch for creating a single fullscreen window. You also have to provide a display name that is NOT the display name of the original Xserver. Another backend called Xegl allows for running Xgl directly on the framebuffer. However, this backend is currently far from being complete and only works on ATI R200 based graphics cards on Linux.

As Xgl with the glx backend cannot run stand-alone, it will automatically start an Xorg server underneath. SUSE's default configuration uses display :93 for that. Only Xgl will be allowed to talk to this Xorg server, and create display :0 for all other applications.

The following graphics hardware is known to work well or recommended for use with XGL. Please add exceptions if there are any.

If you are not sure what card you are using, you can run the following command (as root): hwinfo --gfxcard

If your card isn't listed then you can check out the Gentoo hardware list as well.

Hardware with known glitches or incompatibilities: