Setting up VMware on SUSE Linux

Setting up VMware Workstation on the build versions of SUSE Linux (or even after a simple kernel update on the stable version) can be a bit taxing. This page should help you resolve some of the steps to recovering your VMware installation, or getting your first install to work.

Instructions for a New Install

If you are installing VMware for the first time, these instructions will help you get the task done.

This procedure concentrates on getting a new VMware system up and running. If you have broken a previously-working VMware system by installing a newer kernel version, you will find information on how to re-compile the VMware kernel modules at Recovering VMware Workstation After a Kernel Update. 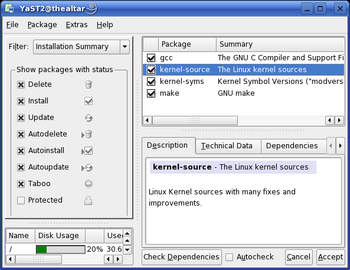 Install the following packages. The Software Management tool in YaST makes this easy to do.

Make sure that your Kernel is up to date. Your kernel version must match the version of the kernel-syms and kernel-source packages.

Warning: If you update your kernel you must be sure to update kernel-source and kernel-syms as well to be sure that they all have the same version. If you update your kernel via YOU (YaST Online Update) you can be 99% sure that if you update the kernel all installed kernel-packages (kernel-{source|syms|doc}) will be updated as well, but better check twice and do not let YOU update your kernel without informing you. Updating kernel (e.g installing version 2.6.13-2) means that kernel-syms and kernel-source (e.g. version 2.6.13) will not match and chances are good that VMware will not work (even with the vmware-any-any-patch).

To make kernel source files usable so that the kernel modules can be compiled, follow these steps.

2. Use su to become root

3. Change to /usr/src/linux directory, and run the following command:

YaST is able to install the RPM for VMware Workstation on SUSE Linux without any problem. You can get the RPM-based installer for VMware from www.vmware.com. Also, VMware will provide you with a 30-day evaluation license to try the product before you buy it. After applying the RPM for VMware, DO NOT run the VMware configuration script (/usr/bin/vmware-config.pl). It will not work properly yet.

Download the latest vmware-any-any-update from http://ftp.cvut.cz/vmware. This update is a relatively small, compressed archive with an automated installer script.

(Note: the version at the time of this writing was vmware-any-any-update94.tar.gz, which worked on SUSE Linux 10.0)

3. Use su to become root

4. Switch to the directory in which you extracted vmware-any-any-update

Responding to the Configuration Script Prompts

There are two common ways to start VMware Workstation.

Note: VMware does not require you to be root. Therefore, it is best practice to run VMware as a regular user. However, you may need to assign appropriate file permissions that allow you to access certain folders.

Starting from a launcher icon

Activate VMware with a License Key

Once you have VMware Workstation running, click on the Help menu and choose Enter Serial Number. This will unlock VMware so you can start creating and using virtual machines.

If you attempted to enable networking during the vmware-config.pl script, and then received this message when you tried to start VMware.

vmware is installed, but it has not been (correctly) configured for this system. To (re-)configure it, invoke the following command: /usr/bin/vmware-config.pl.

Also, if you run vmware-config.pl and do not enable networking, VMware Workstation starts.