Xen3 and a Virtual Network

By default, Xen creates a bridge to which it attaches a physical network interface. To keep the host or priviledged system (dom0) working, it creates a virtual interface for it and attaches this to the bridge.

This works quite transparently on a workstation, but has issues on a server which also serves as a router and firewall. Standard answer, and best practice according to other Xen users, is to hide the physical network interfaces for dom0 and expose them in a domU and have it handle the routing and firewalling.

For my purpose, I would like to run a Xen guest incidentally on my SOHO server. This has some implications, especially when using a firewall. Packets coming from a standard bridge pass the firewall tables differently and will never be masqueraded. Unless you hack extra rules using ebtables, which is what iptables is for routed traffic.

My requiremenst were actually not to have a physical NIC renumbered, renamed and attached to a bridge, but to have a virtual network on my server which will be treated as a DMZ.

To accomplish this, and to have the domUs on my DMZ masqueraded to the net, I tried a brouter setup. And it works wonderfully well.

A brouter is a combination of a bridge an a router. In this configuration, the interfaces attached to it do not have an IP address, but the bridge does. Sticking with the descriptions used in the Xen manual, it is a switch and network interface in one, attached to dom0 and to which the domUs are connected.

So the domUs are bridged to each other, but the connection to dom0 is routed. Hence the name 'brouter'. 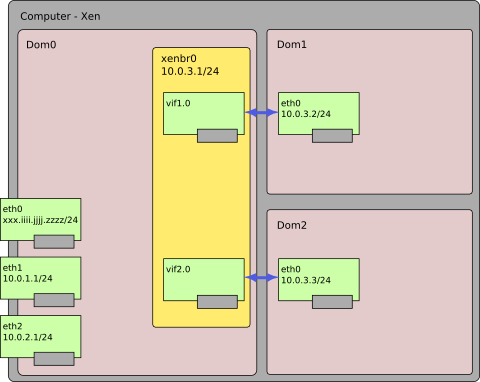 The startup procedure is in essence as follows:

To accomplish this, I use a special script to be started when xend is started, but still use the regular (bridging) script for starting the domUs.

my /etc/xen/xend-config.sxp has contains the following settings for the network (disable any others):

and my domU configuration looks as follows:

You will notice the absence of any network settings in this configuration file. That is because I use the regular SUSE configuration system in my domU to set these.

Maybe it would be logical to show the script before the configuratione, but due to its size I thought it better to put it at the end of the page.