My name is Andreas Girardet and I work for Novell as Linux Evanglist for the Australia New Zealand sales team. You can reach me on girardet@gmail.com or agirardet@novell.com 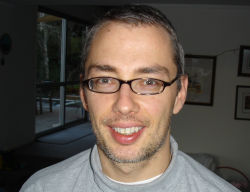 I founded the "Yoper" distribution and am also its former lead maintainer and am now dedicated within the openSUSE project to make SUSE fast and furiously an even better Linux desktop for the windows migrant and the demanding geek alike. I believe that Linux on the Desktop is ready if packaged correctly.

I have also written How to setup a build server and How to setup SUSE 10.0 under xen in SUSE 9.3 I am the maintainer of the openSUSE 1CD iso's available at 1 CD install.

A bit more about me:

I originally come from a german speaking part of North Italy close to the Austrian/Suisse border, called South Tyrol. I left my small mountain village to go to Innsbruck and Berlin to study Philosophy of Logic. I received my MA in Philosophy in 1995 in Berlin. After that I worked as graphic artist/webdesigner/sysadmin for a small TV station. In 1997 I immigrated to New Zealand, my new home and a wonderful country. I met my wife here and the rest is history so they say. Now we have 3 kids, 2 cats and a rabbit and live close to a beach in Auckland. Here a picture of Auckland 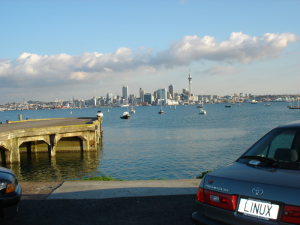 with my "Linux" car in the foreground.

These days I work for Novell as Consultant Architect and resident Linux evangelist.